I’ve been a long time getting to the third book in Suzanne Collins’ Hunger Games trilogy, for no particular reason. The happy conjunction of stumbling across my daughter’s hardback copy and the premiere of the movie later this week spurred me to action. If you have the time, skim through my reviews of The Hunger Games and Catching Fire, as they’ll provide additional context for my comments here. 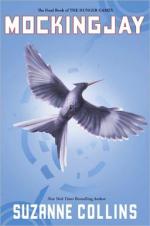 When we left Katniss Everdeen at the end of Catching Fire, she’d just been plucked from the Quarter Quell Arena by a rebel hoverplane and spirited away to the supposedly obliterated District 13, which isn’t obliterated at all, though its population has gone underground and barely manages to keep the Capitol at bay via a stolen air force and the threat of nuclear retaliation. It helped to be the District devoted to atomic research and in possession of an extensive network of impregnable bunkers. What Katniss had perceived as a ragtag, spontaneous resistance movement among the Districts turns out to be a highly-regimented organization that has spread its tendrils deep into the Capitol itself. They want Katniss to be their Mockingjay, the voice and symbol of their revolution. Katniss has a unique ability to reach into the hearts of the Districts’ citizenry, and the rebels need all their support and resources to win.

Katniss, however, is a mental, emotional, and physical wreck. District 12 was firebombed in retaliation for her escape, and almost nothing of it or the people who lived there remain. Besides her arena injuries, she’s in the throes of post-traumatic stress and in agony over leaving her comrade Peeta behind to die. She begins the painful process of fighting through a haze of medication and frustrating therapy to put her life back together, taking some comfort that her childhood friend Gale survived and led a small band of District 12 refugees to safety in District 13.

But then Peeta appears in a Capitol propaganda broadcast with the sinister President Snow, very much alive, and apparently in good health—and he seems to be willingly cooperating with Snow. If Katniss continues to support the rebels, she knows Snow will have Peeta tortured and killed. If the rebels win, they’ll execute him as a collaborator.

The Capitol must fall, and Snow must die. Those are the only two certainties left in Katniss’ universe, but she doesn’t want Peeta’s life to be the price of victory. Forces she can’t control and can barely understand are pushing her down a path that could destroy everything and everyone she loves. Can she find another way, or will the Girl on Fire be consumed by the inferno of revolution she set ablaze?

I’ve seen several reviews that criticize Mockingjay as not quite measuring up to the other two books in the trilogy. They say It’s less gripping, less satisfying, less…something. I think this reaction stems from the fact that, even more so than in the first two books, we spend much of the story locked with Katniss inside her head. We’re plunged into the bloody grind of a full-blown civil war, and Katniss’ role (and our perspective, since the story is told through her eyes) has changed from gritty survivor and hunter to fragile propaganda-poster girl watching from the sidelines. She has always been most riveting and in-control when she’s fighting for her life, and that’s what we’ve come to expect from her. In Mockingjay, Katniss lands in a sheltered, structured environment, and she falls apart. It’s painful to see her this way when she’s been so composed in horrifying situations where most of us would be tucked into a little ball crying for our mommies. Her grace under fire has come at a terrible cost, and that bill is now due.

We spend a lot of time watching her led about by her handlers, struggling to reassemble her broken pieces and looking on helplessly as her friends and allies suffer in the same way, but we need to experience this. Up to this point, the author has flirted with the danger of turning Katniss into a borderline superhero, who, while still human, always manages to hit the 3-point shot, nothing but net, when it matters most. She misses often in this story, and badly. There’s a moment when she crosses a self-imposed line in a combat situation, and it’s chilling how it seems almost an offhand thing, an aside. So, this happened. Oh well, moving right along… There are more crossings of that line, and worse, yet to come.

She ponders, when her head is clear enough, whether the rebels are a better alternative to the Capitol. District 13 traded tyranny and excess for military regimentation and austerity, and their tactics and morality uncomfortably mirror their adversary’s. They have a vague concept of a democratic republic gleaned from fragmented history books, but they haven’t a clue how to establish it or sustain it once they’ve overthrown the Capitol. Until then, they do whatever works, no matter how brutal. Katniss watches in horror as her hunting partner Gale ruthlessly employs the same tactics against humans that he once used to trap animals.

What is true? What is right? How can anyone be certain in a society ruled by fear and maintained by lies as long as anyone can remember? Even a revolution springing from noble motives may install a new order far worse than the one it replaces.

The last third of the book revs into high gear as Katniss finally takes an active role in the offensive against the Capitol. There’s one last battle to fight, one last gauntlet to run, one last score to settle. We discover, along with Katniss, that life in the Capitol may not have been the carefree Dionysian playground we imagined, and the story’s climax is as shattering as anything we’ve yet seen in this series. I have mixed emotions about the conclusion, but I suppose that’s how it should be for this sort of story. War is a foul, messy business, and no one comes through it with their hands clean or their spirit intact. Even the best of outcomes will be leavened with pain, and regret, and nightmares.

Ms. Collins is taking the long view here. Yes, the Hunger Games trilogy is the saga of Katniss Everdeen, but it’s also an exploration of the meaning of freedom, our response to tyranny and slavery, and the path to revolution and beyond. To give that story justice, you have to tally its price in full—for individuals, and for society. The Hunger Games offered a unique vision of what it means to lose your freedom. Catching Fire portrayed the consequences, intended and otherwise, of taking a stand against tyranny. Mockingjay paints a vivid picture of how very expensive the journey back to freedom can be.

Like the other volumes in the Hunger Games trilogy, I recommend Mockingjay for older teens and up, mostly due to the violent nature of the combat scenes and depiction of wartime atrocities. Though depictions of violence are restrained, they may be disturbing. Several characters make morally questionable choices, but these also provide excellent opportunities for conversation between parents and children. No profanity or explicit sexuality. Some abuse of medical narcotics and attempted suicide by distraught characters, but never presented in a favorable light.

>>This review is based upon a copy of the book my daughter bought with her very own cash money. I borrowed it from her because I have enjoyed other stories by Ms. Collins and thought this one would be worth reading. I was right. FTC busybodies looking for conflict of interest should inquire elsewhere.<<

One thought on “Book Review: Mockingjay, by Suzanne Collins”