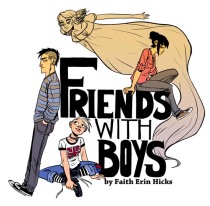 I stumbled across Canadian artist Faith Erin Hicks’ work a couple of years ago in the graphic novel section of my local Barnes & Noble, via a story called Friends With Boys. It was about a girl named Maggie living in a house full of older brothers, trying to sort out her transition from homeschooling to life as a public-high-school freshman. Seemed like standard fare, until she took a shortcut through a graveyard on the way to school and met a ghost.

Okay, what the heck is a ghost doing in a story called Friends With Boys?

The ghost seemed like a…er…kindred spirit, but she had an agenda of her own, and as I read on, it looked like it might not end well for Maggie. I kept flipping pages…

Yes, I know you’re not supposed to go to Barnes & Noble and read entire books without buying them, but I didn’t have enough shekels in my pocket that day, and once I got into the story, I couldn’t stop myself. Yes, I’m pathetic. So shoot me. Here’s a link to the online preview for Friends With Boys. Maybe you’ll understand better after you take a look.

Anyhow, the artwork reminded me of another Canadian comic artist, Bryan Lee O’Malley, author of the Scott Pilgrim books, but there was something distinctive about it…energy, honesty, whimsy, charm, something. Hey, I’m not an artist, but I know what I like. I liked this, and she was a pretty doggone good storyteller, to boot.

As it often goes for me with things like this, I forgot about Ms. Hicks for a while, then I started running into her stuff everywhere. Webcomics like The Adventures of Superhero Girl; a wonderful series of perspectives in cartoon form for Tor.com about science fiction and fantasy books and movies—including my personal favorite, her famous (or perhaps infamous) “Punch of Love” synopsis of Madeleine L’Engle’s A Wrinkle in Time; and most recently, a collaboration with Gene Luen Yang for an issue of Dark Horse’s Avatar: The Last Airbender comic book that will debut on May 3 as part of Free Comic Book Day.

Her current project is a graphic novel trilogy inspired by the cultures and legends of Central Asia called The Nameless City, and she’s posted a ton of development sketches on her Tumblr blog which are well worth perusing, particularly if you have an interest in comic art and are curious about how a concept proceeds from idea to finished product.

Yes, I plan to buy it. Maybe that’ll make up for not buying Friends With Boys. Yet.

UPDATE (2 May 2014): Adventures of Superhero Girl has been nominated for two Eisner Awards this year, Best Humor Publication and Best Publication for Kids.

UPDATE (10 Jul 2014): Here’s a wonderful sample of Adventures of Superhero Girl, in a stand-alone short from Ms. Hicks in honor of Canada Day. I guarantee it will put a smile on your face.

Link to Purchase Friends With Boys