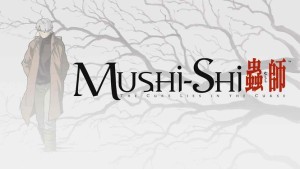 A young woman with a beautiful voice lives as a silent pariah in a plague-scarred town.

A comatose girl’s breath provides miraculous healing to the inhabitants of a lonely island.

Time stands still within a bamboo forest that has many entrances, but no exit.

A living bridge awakens to span a forbidden chasm, but only for a single night.

Horror lurks beneath the foundation of a house where dead children are resurrected.

Mushi are mysterious, ethereal creatures—simpler than microbes, but as intelligent as human beings. They’re connected to the life force of our planet and take on an infinity of forms from the graceful to the grotesque, from animal, to vegetable, to mineral—for those who have eyes to see them. They’re often simultaneously beautiful and deadly, like a tiger or snake. They are fascinating, but never to be underestimated or trifled with. Mushi are possessed of otherworldly powers capable of helping or harming human beings. When our reality collides with theirs, wonders and horrors inevitably follow.

Ginko is a mushi-shi, a mushi master, well-versed in the complexities of these enigmatic life forms, their behavior, and their effect on humans. We follow him as he wanders about the countryside as a freelance researcher and troubleshooter, diagnosing and treating the bizarre imbalances and afflictions arising from imprudent contact between human and mushi.

Certain individuals have an affinity for mushi and attract them like iron filings to a magnet, for better or worse. Ginko is such a person, which is helpful in his vocation but causes trouble for those who linger near him. This is one reason for his itinerant lifestyle. He bears his affliction with patient resignation, doing what he can to help his clients before he has to shoulder his little cabinet full of scrolls and remedies and move on again.

Humans most often run afoul of mushi by ignorance or stupidity—blundering into a secluded canyon, picking an unusual flower, fishing at the wrong time of year, razing an unexplored forest or destroying an ancient landmark.  Since most people can’t see mushi, they might attribute their effects to misfortune or caprice of the gods. Unscrupulous people might even attempt to exploit mushi for profit, and that almost never ends well.

If they’re more attuned to the unseen world, folks with mushi problems might send for help from Ginko or one of his colleagues. Ginko is unusual among mushi masters in that he operates within a sort of Hippocratic Oath: he strives to find cures that work harmoniously with nature and cause no harm to either humans or mushi, and the problem itself is often the source of its own solution. Most of his contemporaries prefer to exterminate or banish mushi and give no thought to the circumstances that brought them into conflict with the human world. As you might expect, such heavy-handed techniques sometimes yield nasty unintended consequences.

This anime cultivates a dreamlike feeling, aided by beautiful landscapes, soft instrumental music, and haunting, surreal images that linger in the mind. Mushi-Shi is set in Japan, at an indeterminate point during the transition between the Edo and Meiji periods of Japanese history, sometime in the 19th Century. Trackless forests beckon—dark, green, and mysterious. Mushi roam the sky in the form of giant centipedes, swirls of multicolored polyps, twisting spirals of sentient energy, or sometimes as dragons that coil into the snowcapped peaks of windswept mountaintops. The visuals are, in a word, astonishing.

The storytelling in Mushi-Shi is episodic, each installment pretty much standing alone except for a few connecting threads, like Ginko’s backstory or friendships that bring a couple of supporting characters back for additional appearances. It’s like a series of folk tales, each with a gentle message about human relationships, our connection to an often delicate natural world, or the deceptive importance of small things we take for granted. A few are powerful stories of love and redemption. All are worth the watch. The opening theme is “The Sore Feet Song,” a sweet little composition by Scottish singer/songwriter Ally Kerr that fits the overall mood of the series and Ginko’s character perfectly.

Teens & up. No explicit content, but some mild swearing and a few intense moments. Some of the imagery could be a little creepy/icky/nightmare-inducing for younger children. Ginko’s usually smoking—it keeps the mushi away, sort of like a mosquito coil.

Mushi-Shi is based on a manga by Urushibara Yuki that also spawned a live-action feature film. 26 episodes, currently streaming on Netflix, Hulu, and at Funimation.com, which owns the license for the U.S. release. You can also pick up the complete series on DVD for about $16 plus tax (a steal) at WalMart’s online store, of all places. Go figure.

I previously reviewed Suiiki (Waters), another manga by Urushibara Yuki and another excellent melding of story and art. At the time, I didn’t realize he was also the mind behind Mushi-Shi, but it makes perfect sense to me now.

UPDATE (May 7, 2014): A second season of Mushi-Shi, “The Next Chapter,” is now streaming on Crunchyroll, Hulu, and Funimation. The opening music has changed (“Shiver,” by Lucy Rose), but otherwise, it’s the same wistfully-haunting series.